My game suddenly completely freezes and I can’t do anything. After a while it even crashes.

The issue is caused by the Winterfest .. in detail: The creation of Father Winter. 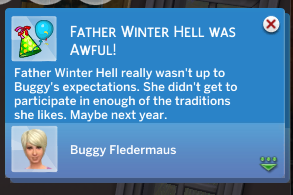 Father Winter (or rather his beard) can’t be correctly created by the game because of an exception. This leads to the game endlessly creating Sims with the Father_Winter trait. This in turn bloats the save and that has influence on the save game

If you already have Father Winter in your game (named as Clemens Frost), you should be safe but I recommend making a backup before Winterfest just in case.

EA is aware of the issue and working on it

Typically this issue comes with any of the following symptoms

Affected saves can only be repaired with a mod, since the households are hidden and can’t be manually deleted. If you have 6000 or more households, you don’t really want to do that anyways

Because of this, there’s only one solution: Load a backup of your save.

As an alternative you can put your save game aside and hope that EA solves this bug in a way that the faulty households get deleted. Play a different save in the meantime.

You can also upload your houses/Sims to gallery (if the save allows) and just place them in a fresh save. You will loose all non-household relationships.

If you do have one, make a backup of your save before attempting Winterfest. 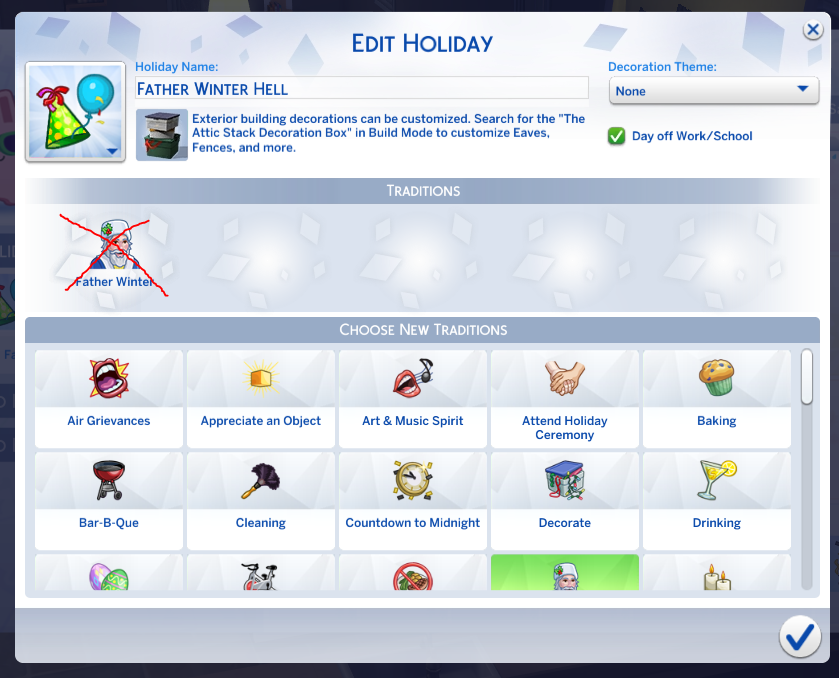 Mods that help with the issue

You need both mods if your save game is already affected from the issue. If not, use LeRoiDeTout’s mod, to fix the LastException that causes the issue. With the mod in, there should be no issues having Winterfests.

You need the base module of MC Command Center as well as MC Cheats.

Warning: Depending on how badly your game already lags, this might no longer be a solution. It needs lots of patience. It’s also not possible to only delete the hidden households but only the ones that don’t live anywhere.